The Nielsen National Television Household Universe estimates that there are 121 million TV homes in the United States for the upcoming 2020-2021 TV Season. 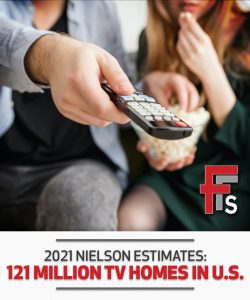 One of the main aspects we take into account at Farfetched Studios when developing a marketing plan is the overall reach of the campaign and how to achieve that goal. To ensure the largest amount of reach and audience penetration, television broadcasting and streaming is the answer. TV has grown exponentially with several different platforms all available on the same device. With increased accessibility from their TVs, we are seeing a big jump in TV homes in the U.S.

The number of people two years or older in U.S. TV Households is estimated to be 307.9 million, which shows a 0.2% increase from last year’s numbers. Increases were also seen in Hispanic, Black and Asian TV Households up to +2.7% due to estimated increases in population growth.

Nielsen used the U.S. Census Bureau data with information from their national TV panel to arrive at these estimates in early May. Followed by distribution of their final Universe Estimates before the start of each TV season.

The percentage of U.S. homes with traditional TV signals via the antenna, cable, DBS, Telco or via a broadband internet connection connected to a TV is currently 96.2%. This is an increase of 0.1% from last year’s results for the end of the 2020 season.

According to the Nielsen website, “Nielsen’s national definition of a TV Household is a home with at least one operable TV set that is able to receive audio and video through cable, satellite or over-the-air source, or through streaming video from the internet.”

With these increased projections, it is easier to predict the reach and penetration of each TV campaign based on specific market breaks. Without Nielsen’s projected data, we would not be able to accurately distribute your campaigns to the correct demographic in your target area! Let Farfetched Studios take the reins of your next TV marketing campaign to ensure your ad penetrates the market and reaches your specific demographic!